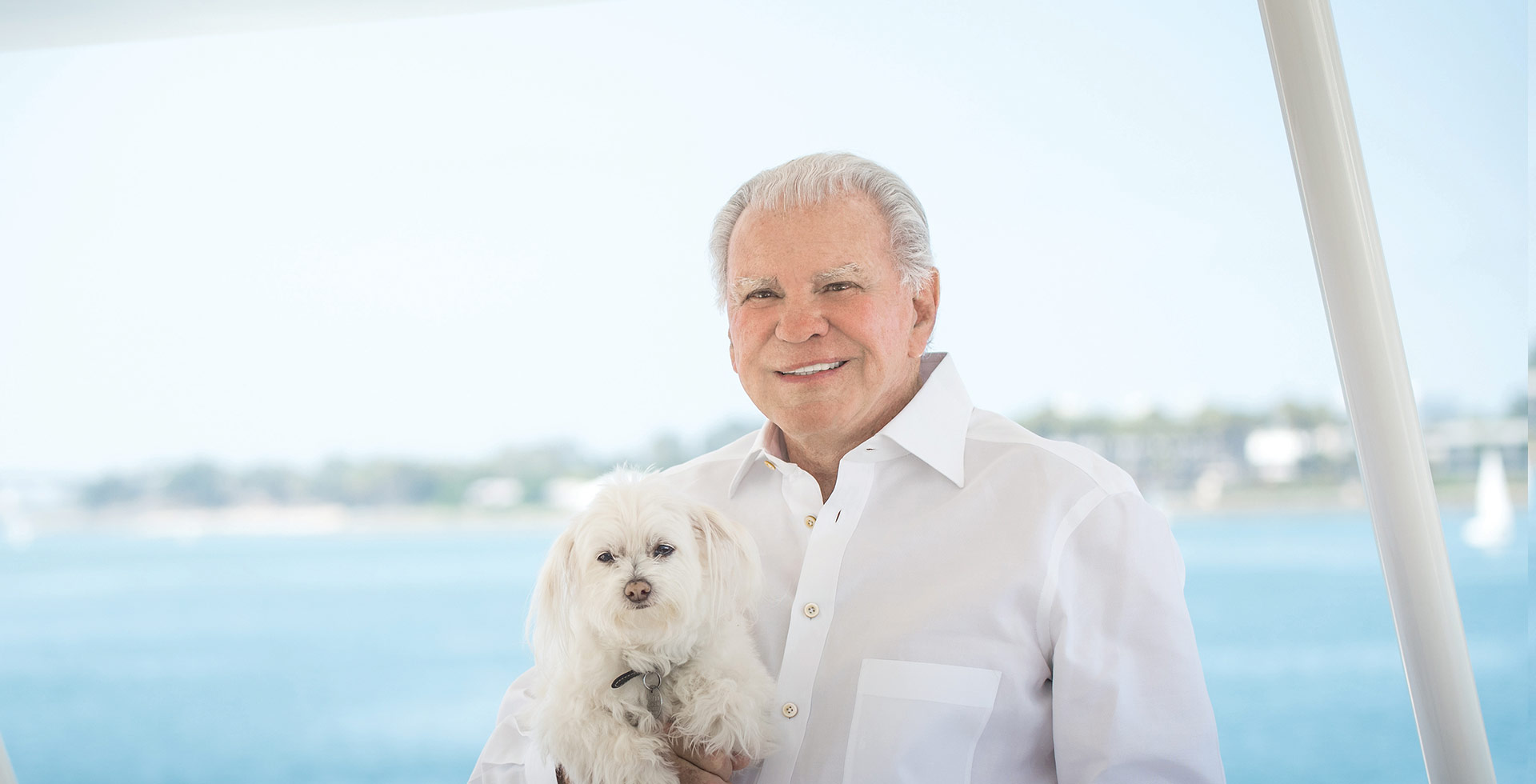 Get to Know Us

Select the area below you would like to learn more about!
Our Founder
History of Robson
Awards & Honors
Edward J. Robson

Well-regarded as one of the nation’s most successful active adult community developers, Edward J. Robson remains community focused and understands the importance of giving back and being actively involved – not just in his own community, but in the greater community as well.

There’s a great sense of pride when I drive through Sun Lakes each day to our corporate headquarters. With almost 20,000 people living here, it gives you perspective as to how far you’ve come. 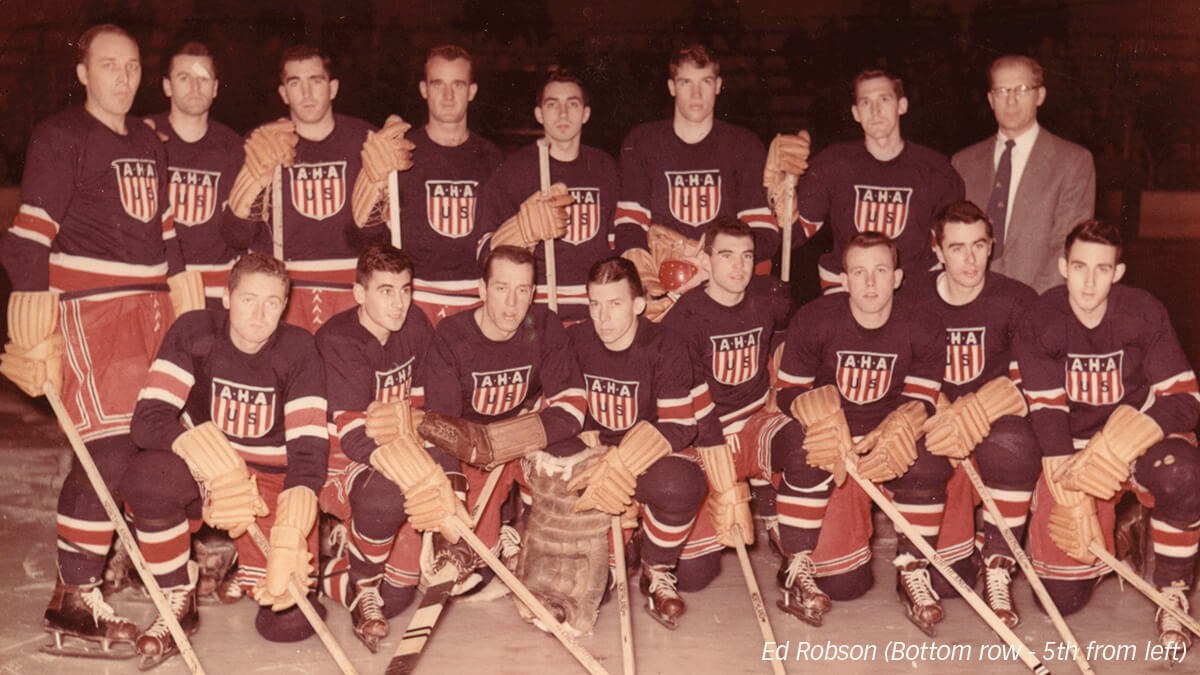 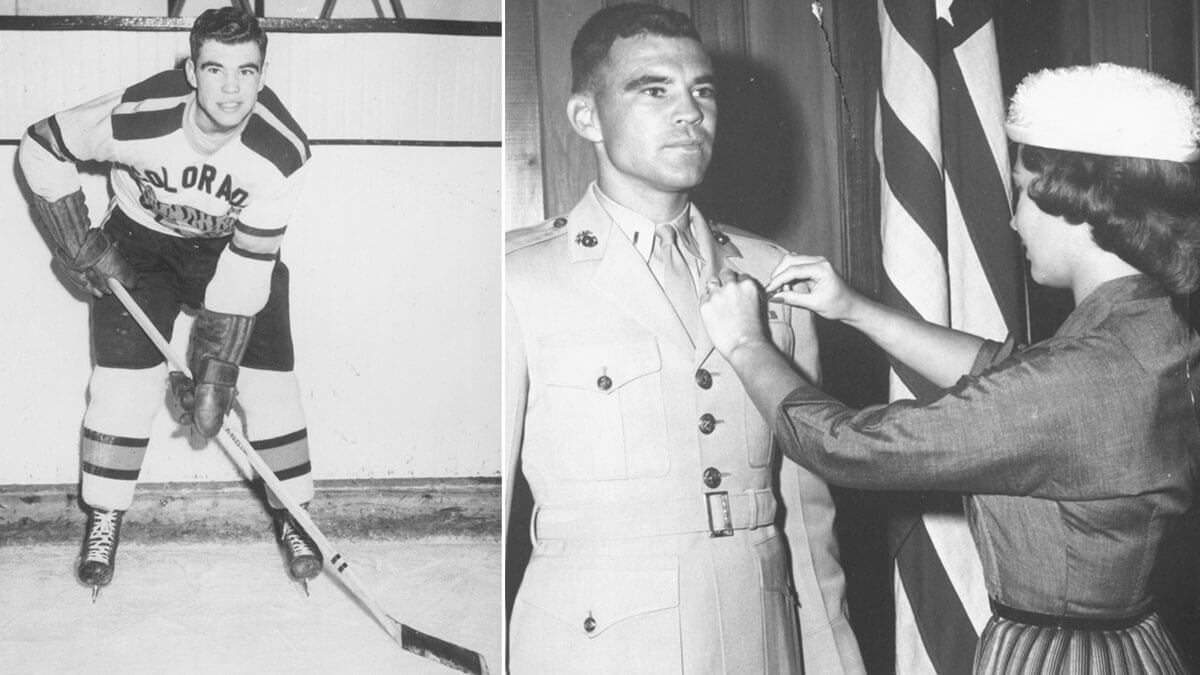 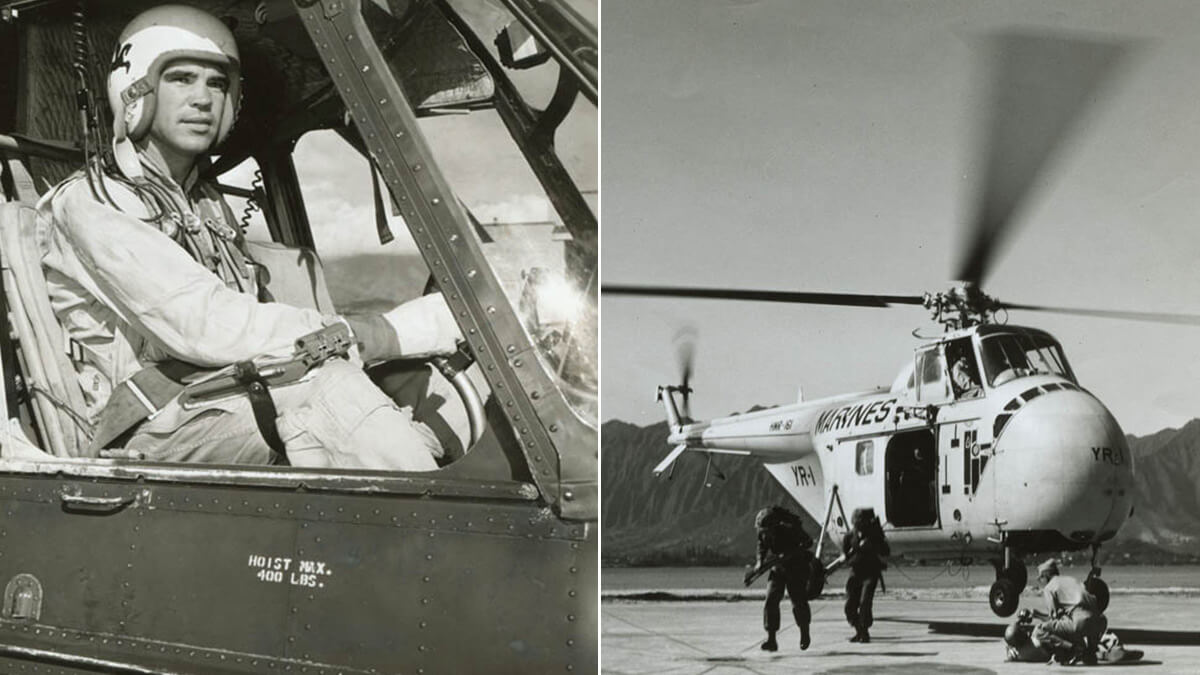 Edward J. Robson was born September 21, 1930 in Brighton, Massachusetts, and grew up in Belmont and Arlington, both nearby suburbs of Boston. During his senior year at Arlington High School, Robson was a starter on the school’s New England Championship Hockey Team. He attended Bridgton Academy from 1949 to 1950 where he also played hockey.

Robson began his college career at Colorado College where he was active in hockey and baseball earning a Bachelor’s degree in Business & Banking.

After graduation, Robson was married to LaNelle Beck in Phoenix and shortly after, joined the United States Marines. During a five-year tour, Robson was granted leave to play hockey for Team USA in 1955 and the next year, 1956, was selected to become a member of the US Olympic hockey team. Robson closed out his last three years completing flight school and flying Marine helicopters in Hawaii. 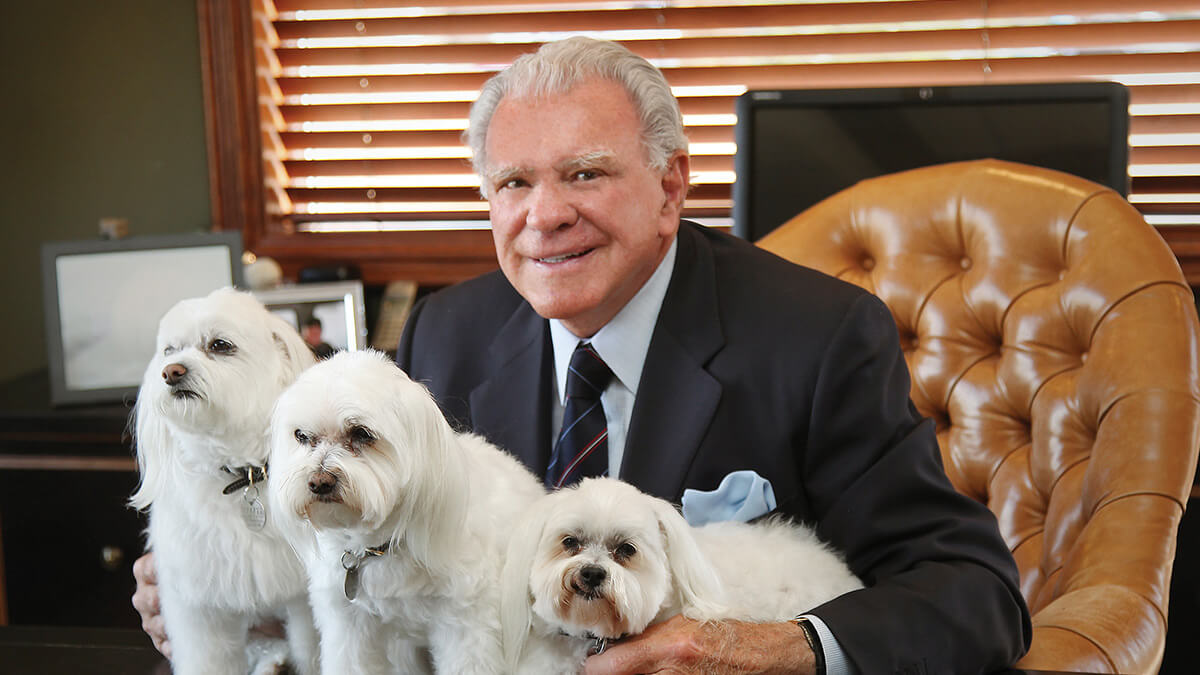 Each Robson Resort Community offers unsurpassed luxury homes within communities that combine a beautiful setting and live up to founder Ed Robson’s passion for creating excellence in every retirement resort. 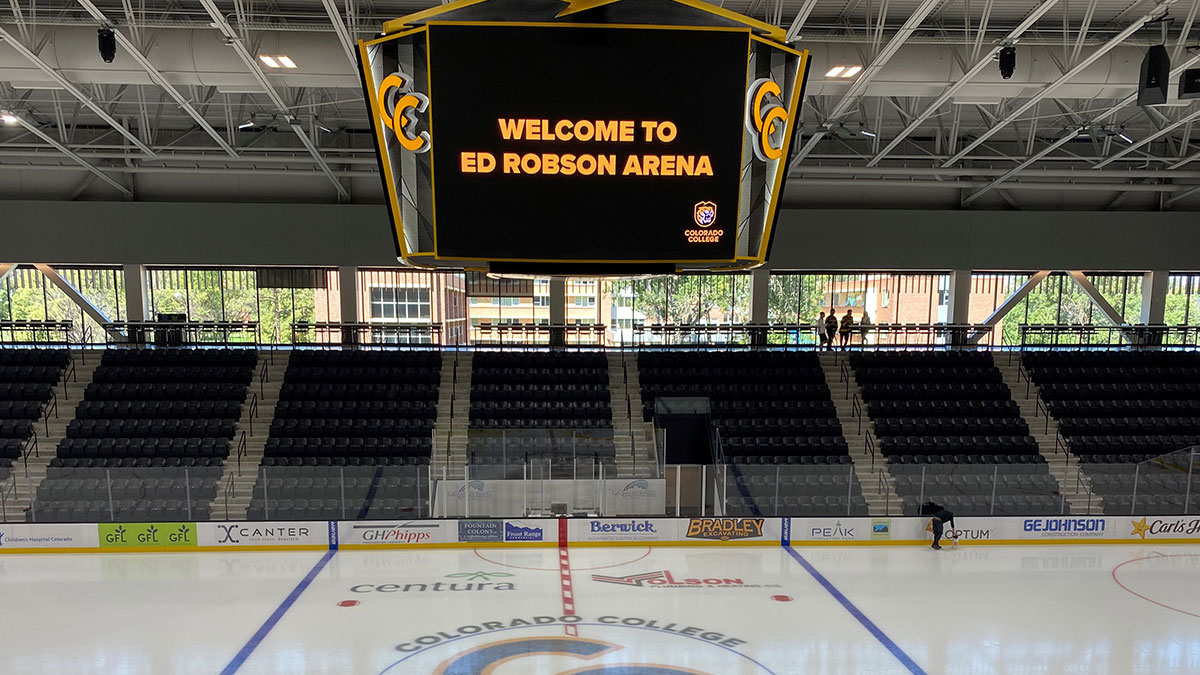 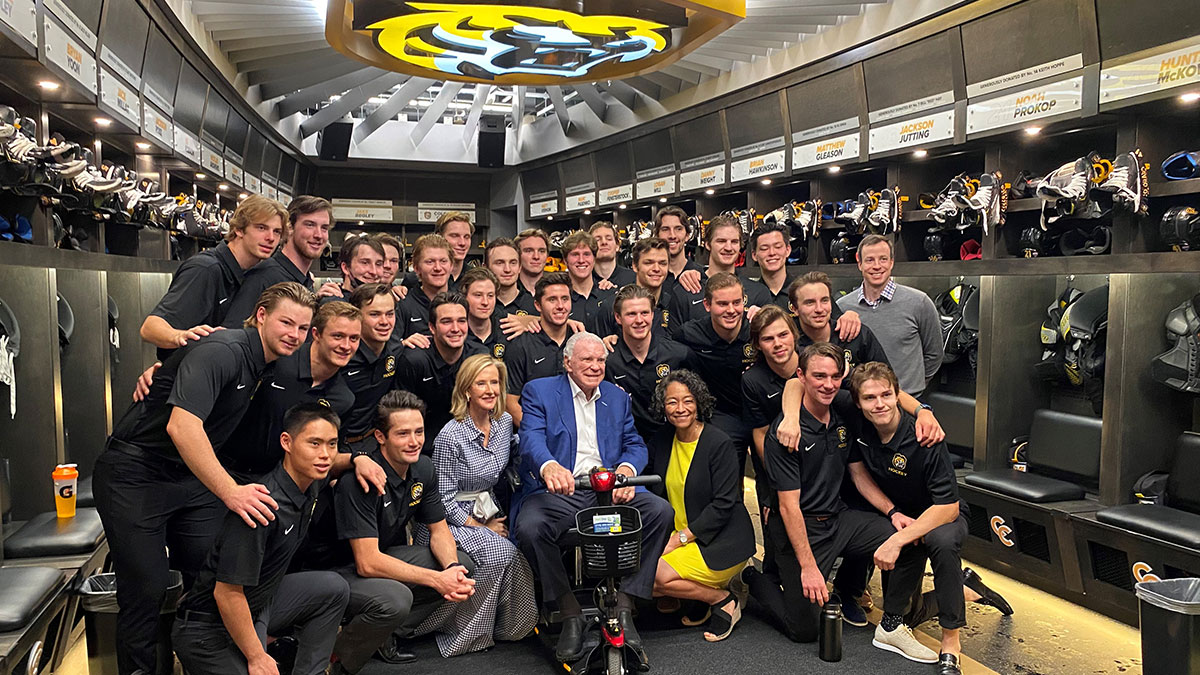 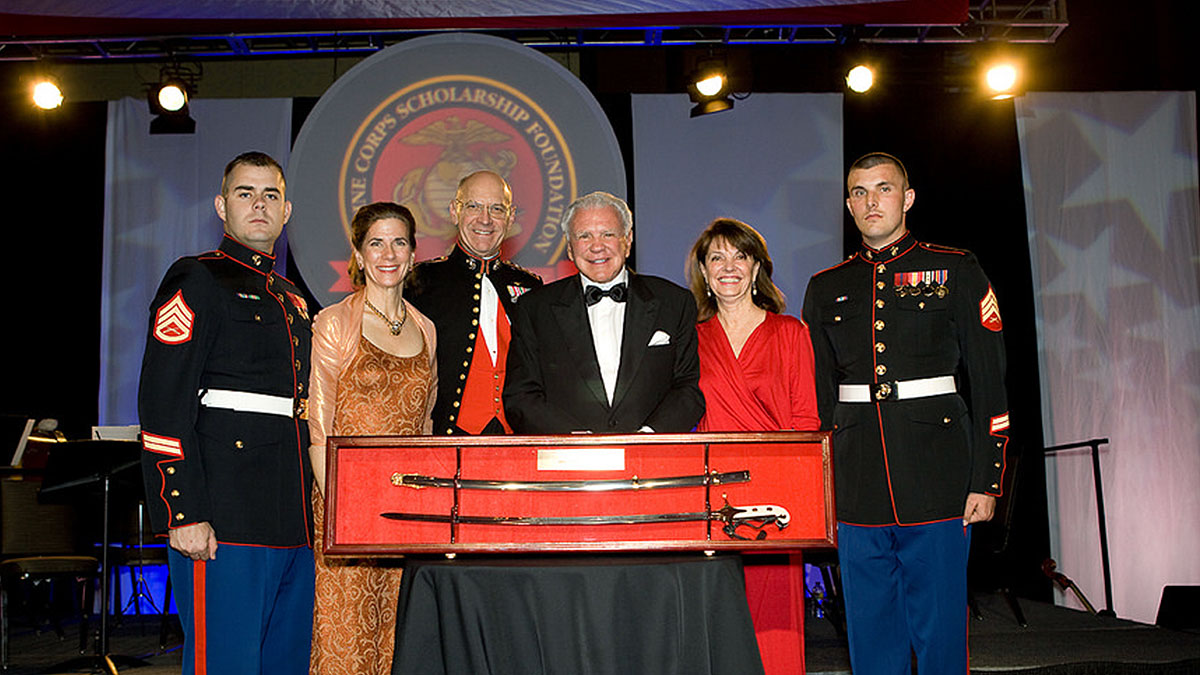 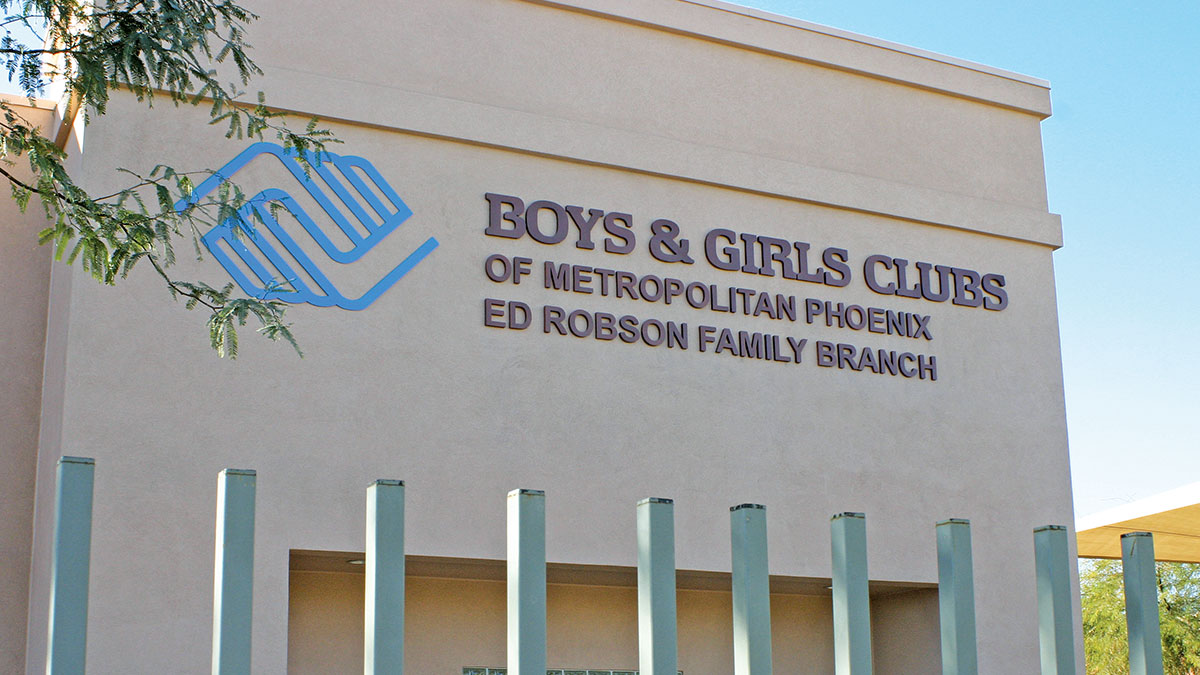 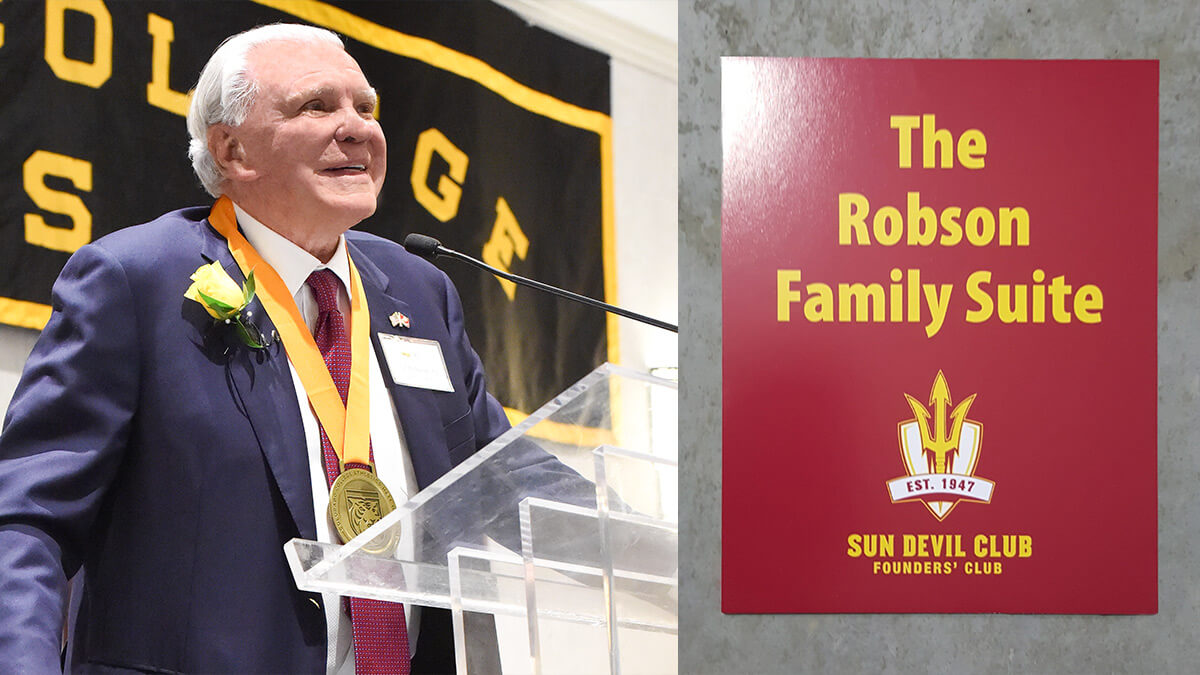 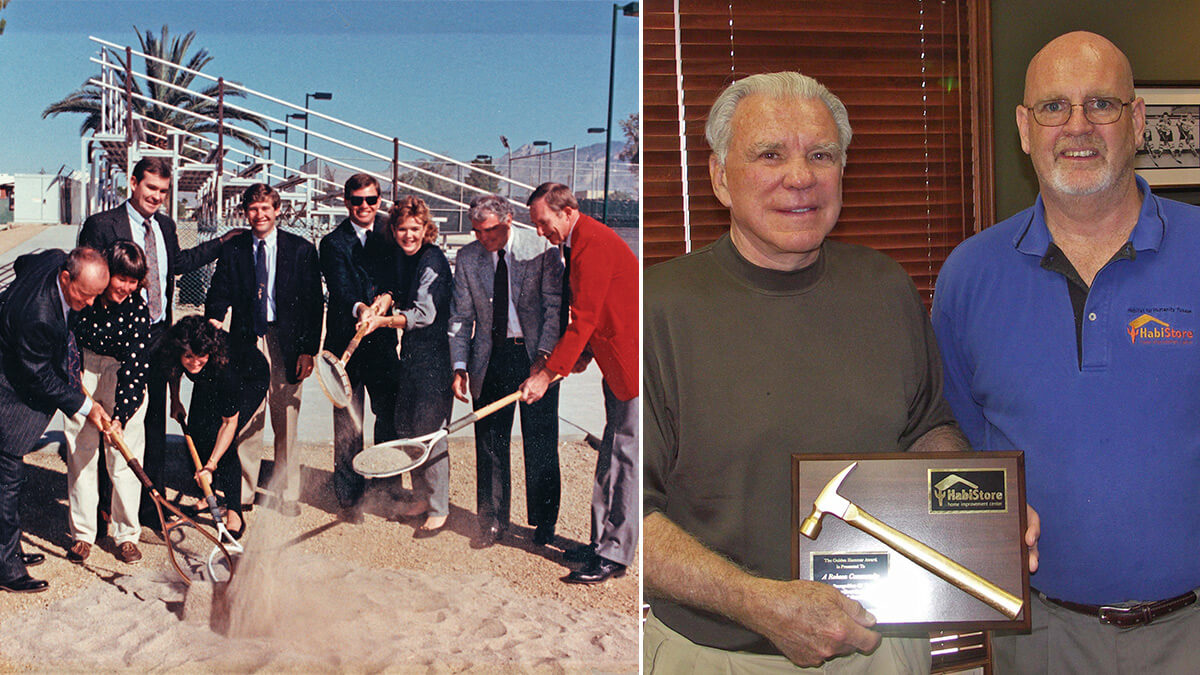 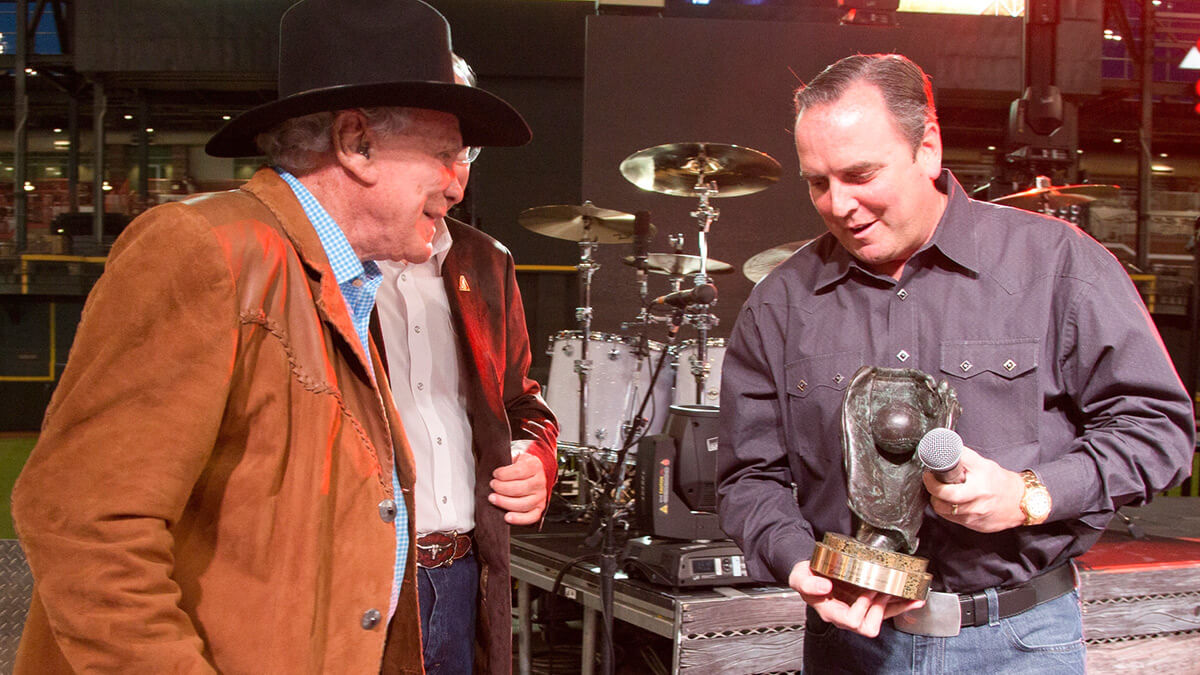 More than 100 awards and honors have been bestowed to the Robson Resort Communities over the past five decades recognizing Ed Robson and his team for outstanding achievements in the homebuilding industry.

Robson’s impressive accolades include Entrepreneur of the Year Award from Arizona State University, Outstanding Business Leader from Northwood University, the Doctor of Humane Letters from Colorado College, the prestigious Grand Award from the Home Builders Association of Central Arizona, a Golden Hammer award for his generous donations to Habitat for Humanity, the Semper Fidelis Award by the Marine Corps Scholarship Foundation, as well as the Lee T. Hanley Community Leadership Award from the Arizona Diamondbacks Foundation.

In addition, Robson has been honored by the National Association of Home Builders 55+ Housing Council with a Builder of the Year award and also an Icon of the Industry award. The National Association of Home Builders also honored Robson with a Best in American Living “Hall of Fame” award for significantly impacting the residential design and construction field.

Robson’s been inducted into his high school Hall of Fame in Arlington, Massachusetts, and more recently, into Colorado College’s Athletic Hall of Fame.

One of the most important parts of Ed Robson’s life has been philanthropy. He prides himself on giving back to the community and making a positive difference in people’s lives.

In 2008, the Ed Robson Family branch of the Boys and Girls Club of Metro Phoenix opened its doors, and in 2015 contributions were made to Boys Hope Girls Hope of Arizona to help revitalize the Boys Hope home.

Robson is one of the Founders for the newly renovated Sun Devil Football Stadium at Arizona State University. He also established an endowment to help fund the hockey program at Bridgton Academy.

Most recently, the Ed Robson Arena opened in Colorado Springs. Robson attended a ribbon-cutting ceremony for the hockey arena named in his honor at Colorado College.   Robson played hockey for the CC Tigers in the 1950s and is a key donor for the state-of-the-art complex. The 3,407 seat-arena is approximately 120,000 square feet and includes competition space, locker and restrooms, concessions, storage, and administrative offices. A multipurpose space and outdoor patio will be used for various events and student activities.

When I go into a clubhouse, homeowners will come up to me and thank me for building a wonderful place to live. It’s rewarding to know that you’ve made a positive impact on people’s lives. 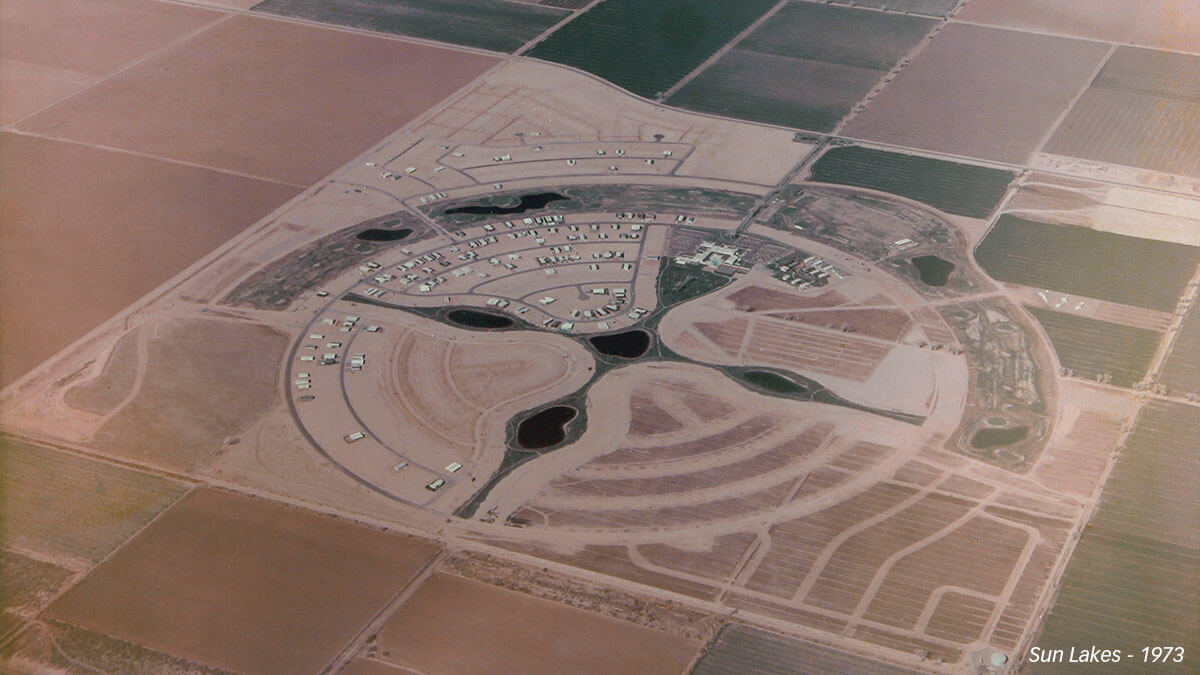 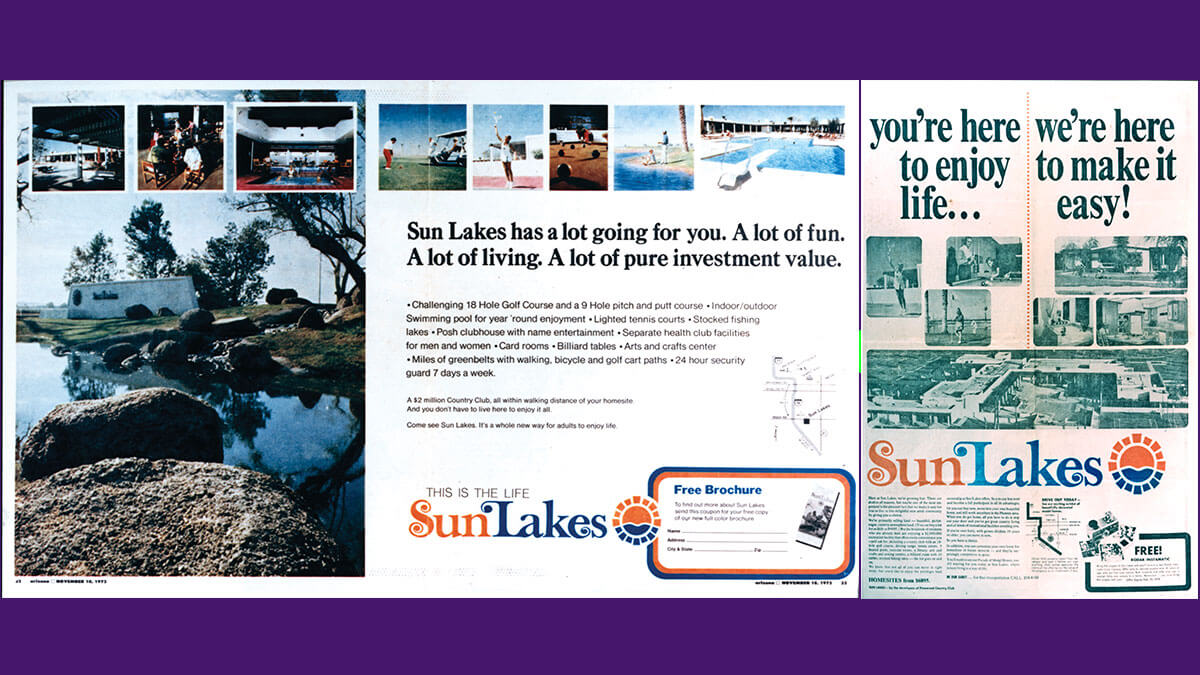 The concept of providing active adults a resort lifestyle was pioneered by Ed Robson in the early ’70’s. Robson acquired 2,560 acres of farmland in a limited partnership for the Sun Lakes development near Chandler, Arizona, in 1972. Initially, the partnership only sold lots and mobile homes in order to compete with Sun City. Robson survived the energy crisis in the mid-seventies and bought out his partners.

In late 1976, Robson made the decision to switch from offering mobile homes to on-site built single family homes. Sun Lakes continued to flourish during the next two decades despite record-high interest rates in the early 1980s and the downturn in the housing market in the late 1980s/early 1990s. Now sold-out, Sun Lakes is comprised of approximately 10,000 homes, five golf courses, five country clubs, two shopping centers and a medical and education center. 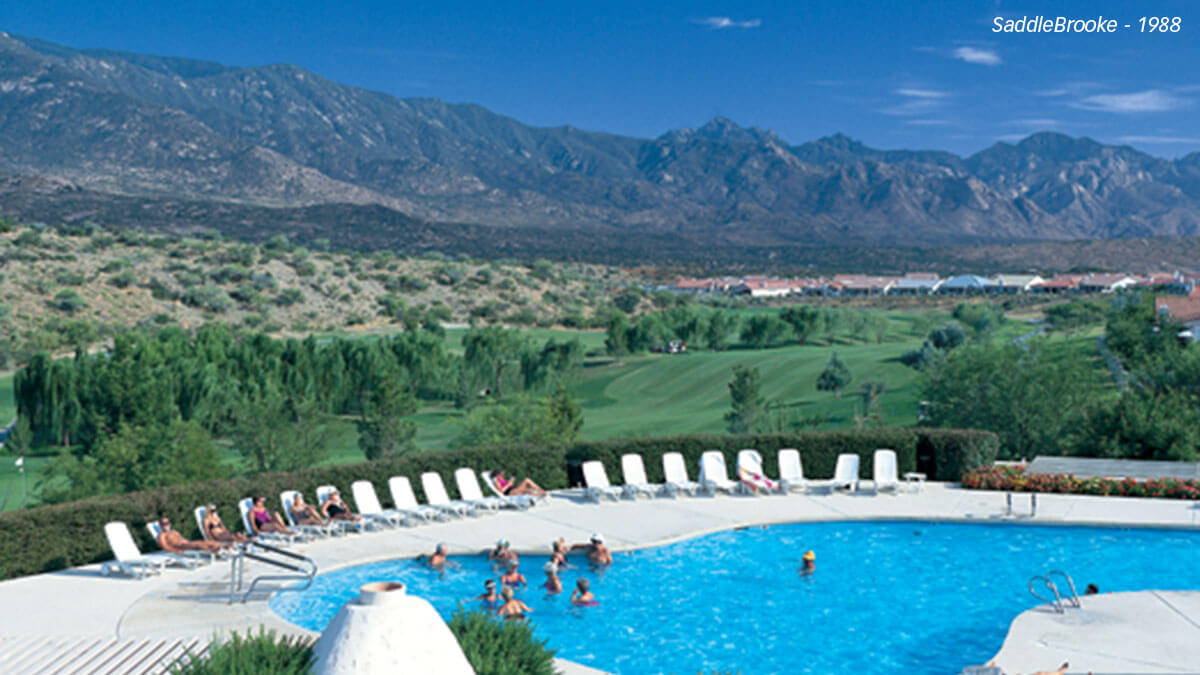 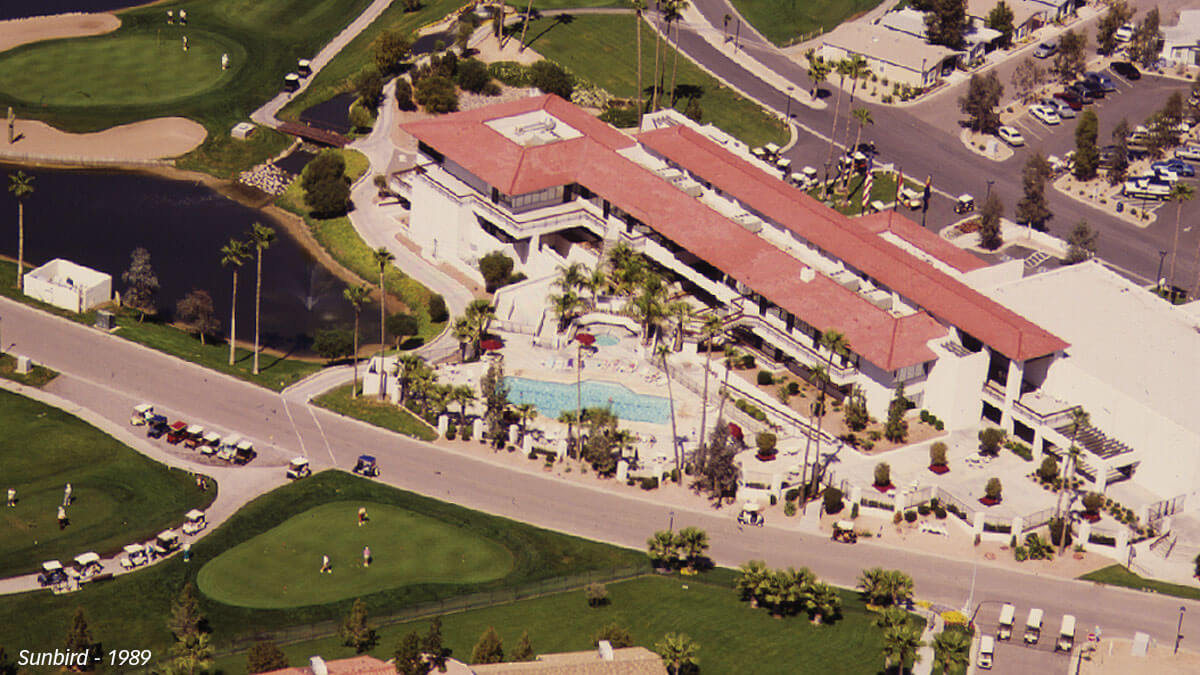 After weathering the savings & loan crisis of the late 1980s, SunBird, located in Chandler, Arizona, was acquired from the REO portfolio of a St. Louis Savings & Loan institution in 1989. This active adult community, which features an 18-hole executive golf course and a 40,000 sq. ft. clubhouse, was sold-out in 1998 with more than 1,600 homes built. 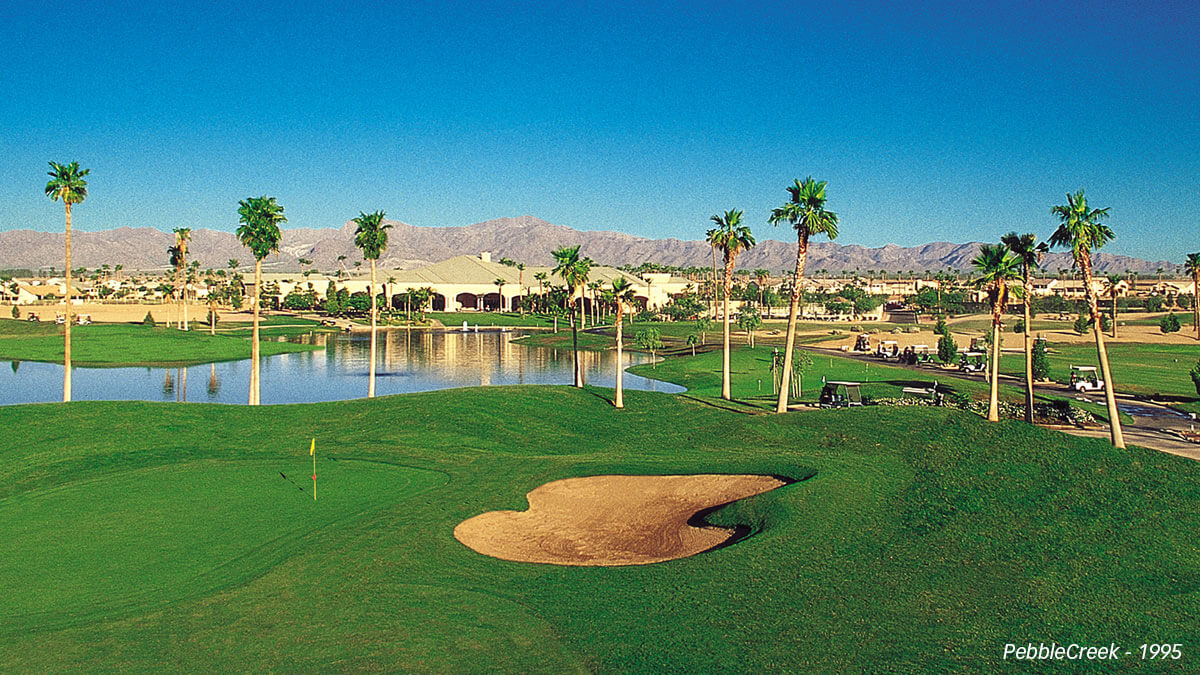 The next development in Metro Phoenix was PebbleCreek, a Robson Resort Community located in the city of Goodyear. Launched in 1993, PebbleCreek helped establish the southwest valley of Phoenix as a popular destination for homebuyers in the 1990s. More than 8,000 homeowners currently call PebbleCreek home and enjoy a variety of resort-style amenities including 54 holes of championship golf, two country clubs, state-of-the-art Sports & Aquatics facilities featuring a 20-court Pickleball complex and a Performance Arts Theater featuring local and national acts.

Quail Creek, located in southern Arizona, was acquired in the summer of 1999 and had sold less than 100 homes in ten years. After developing new products, amenities and activities, Quail Creek has sold more than 2,000 homes. Amenities now include 27 holes of championship golf, a luxurious clubhouse, restaurant, indoor & outdoor sports facilities showcasing 16 Pickleball courts and a Creative Arts & Tech Center, all with the Santa Rita Mountains providing a picturesque backdrop. 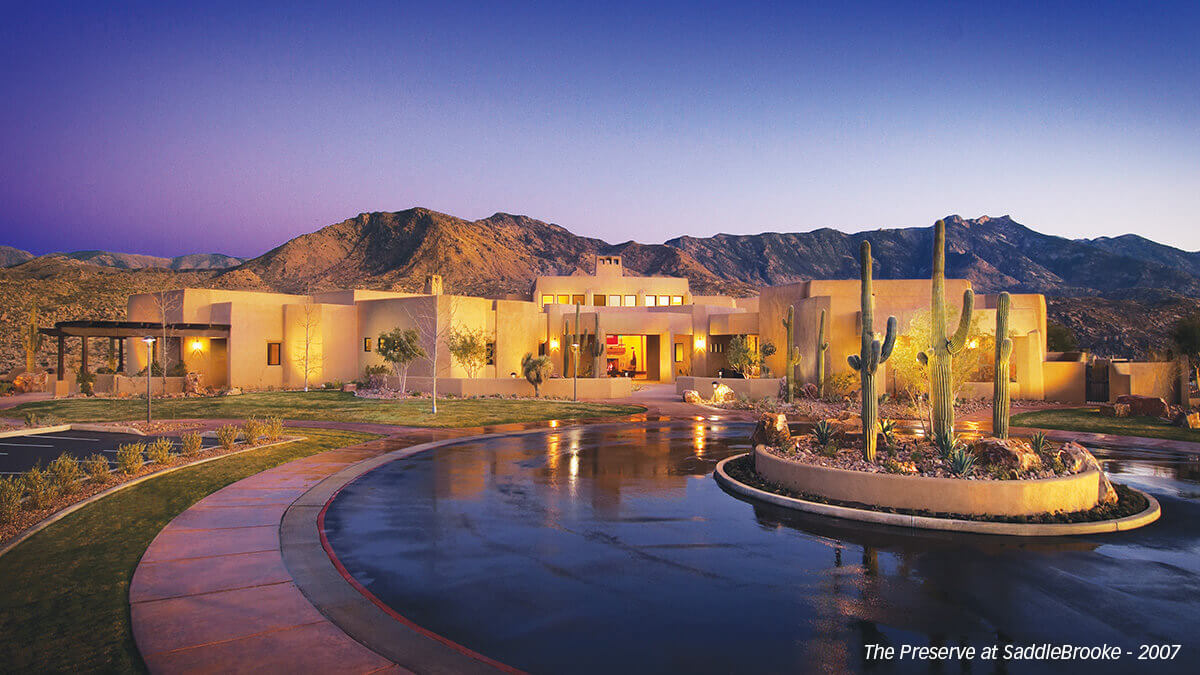 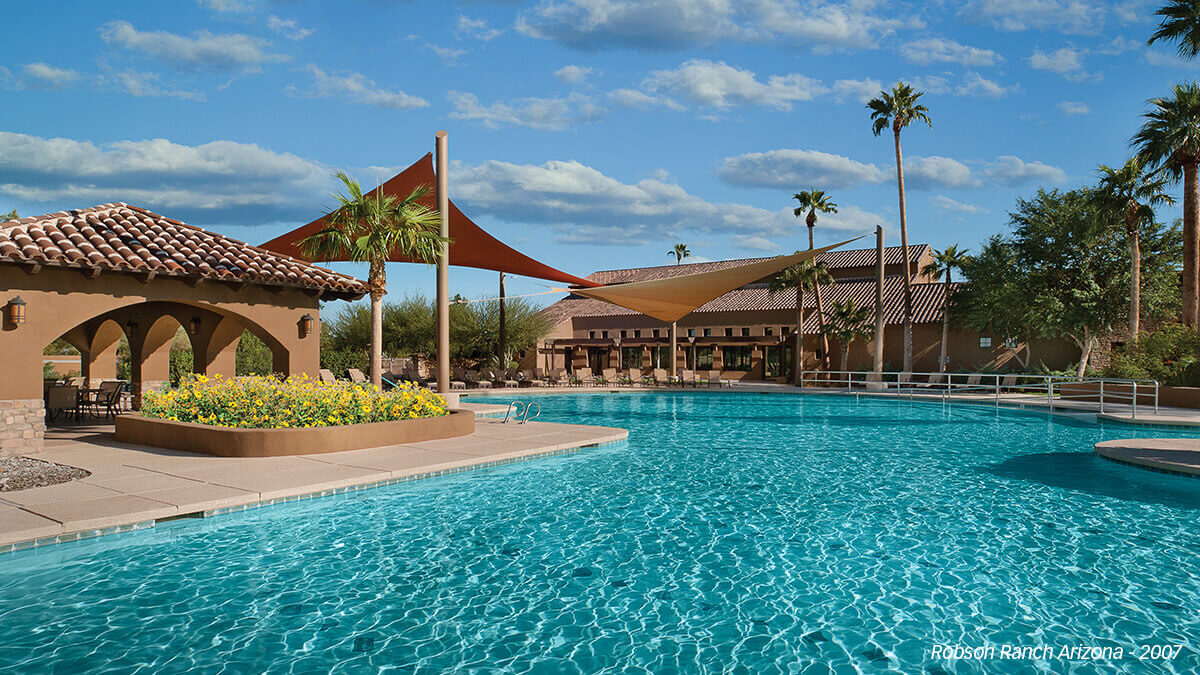 After many years of extensive research and feasibility studies in the Texas market, the first Robson Resort Community opened outside of Arizona, in the Dallas/Fort Worth Metroplex with the official grand opening in May 2001. Robson Ranch, located south of Denton off I-35W, is now home to more than 3,000 homeowners who enjoy resort-style living including championship golf, fitness, sports, creative arts and much more.

In 2004, The Preserve at SaddleBrooke was unveiled, located within the northern section of SaddleBrooke in North Tucson. The Preserve offers the pinnacle of country club living with luxurious homes situated on premium homesites, world-class amenities and dramatic mountain views of the Santa Catalina Mountains. 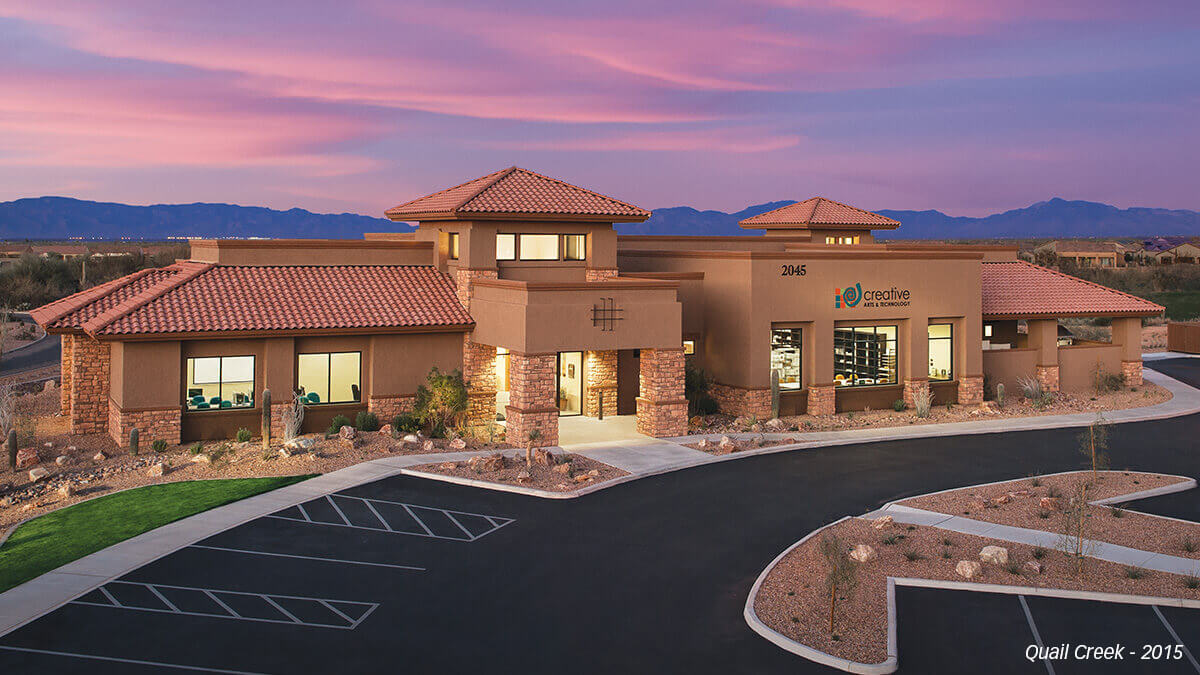 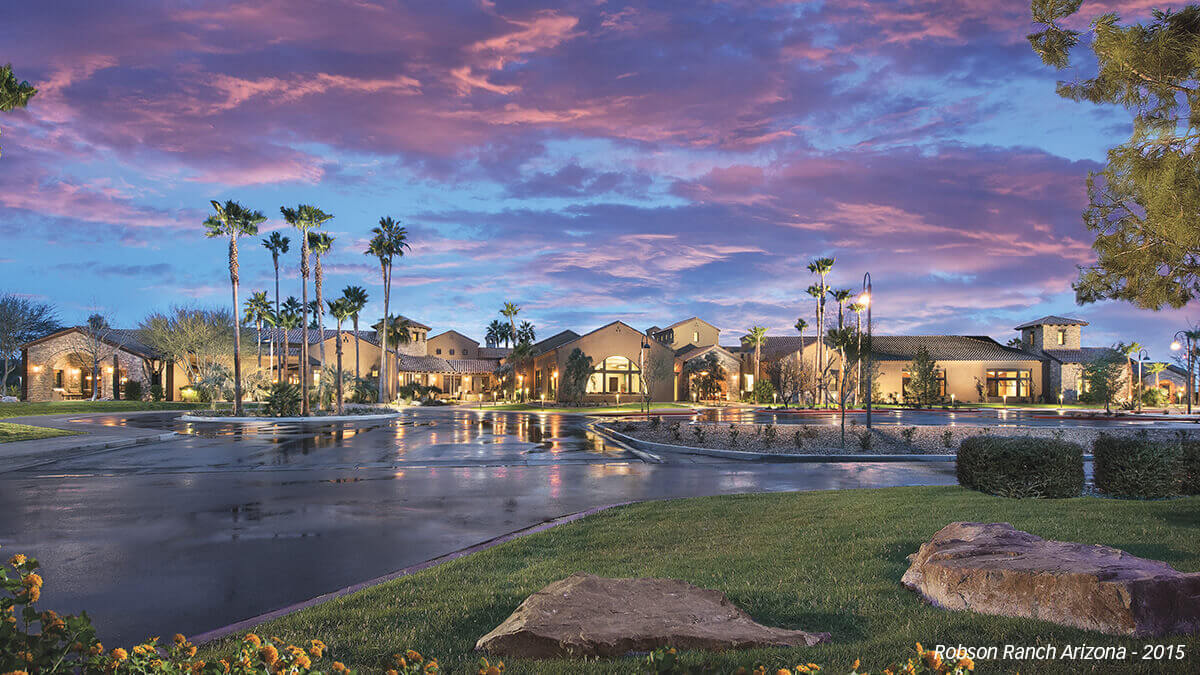 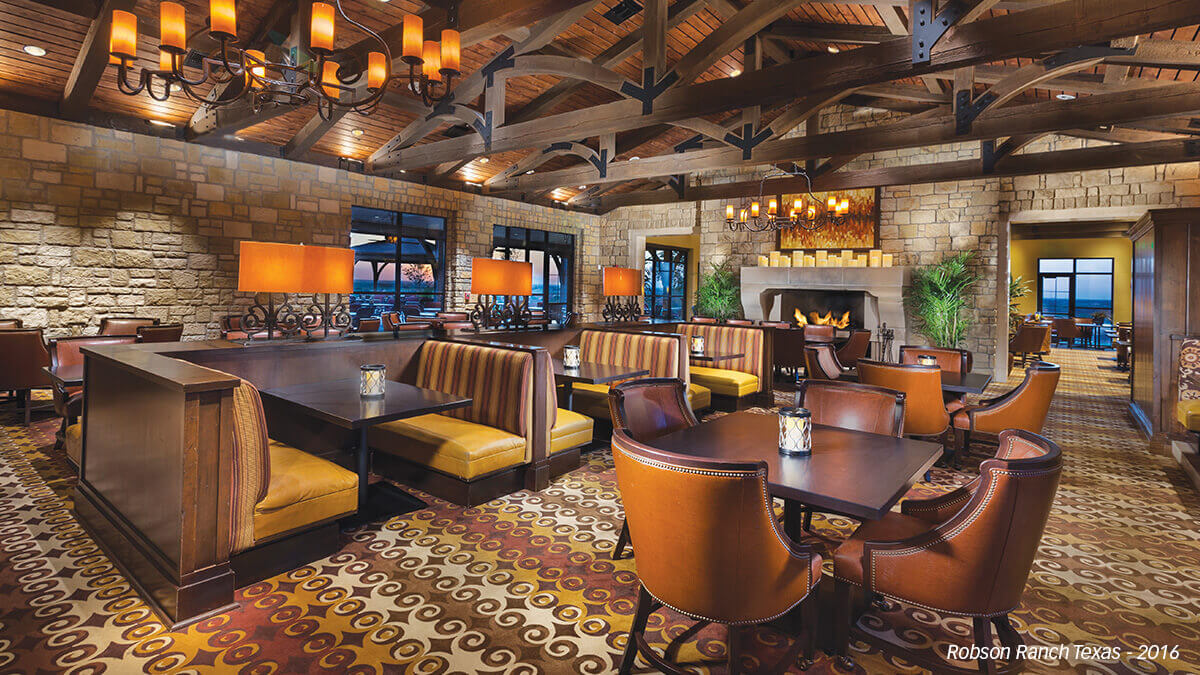 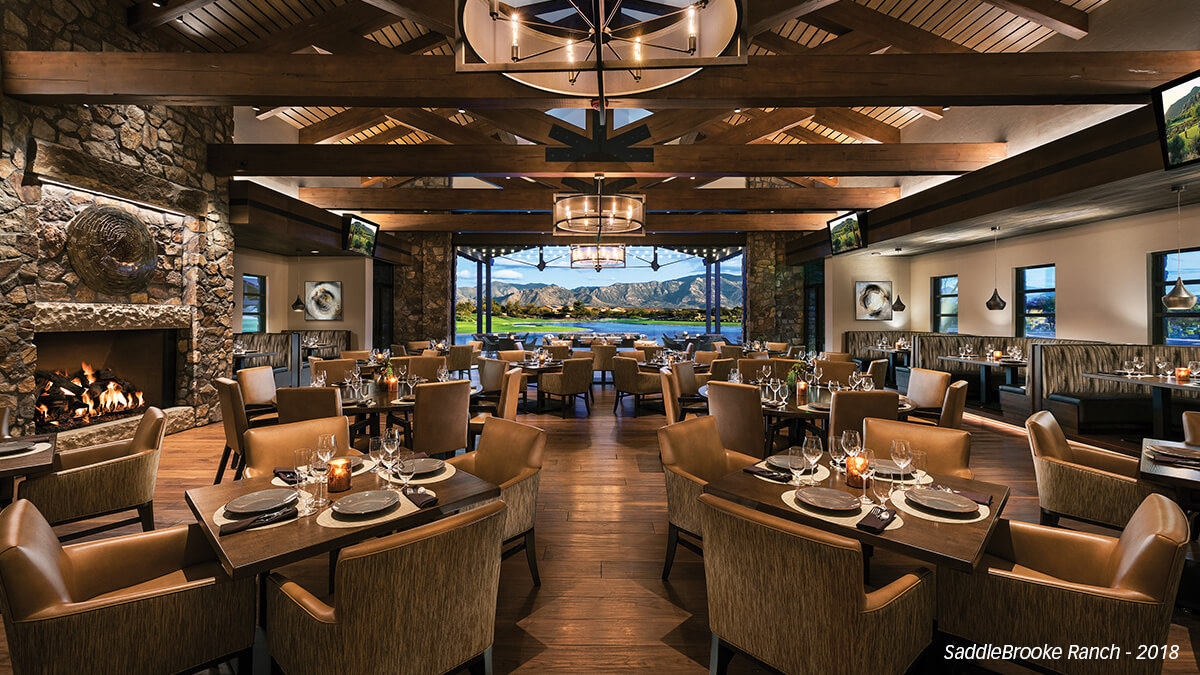 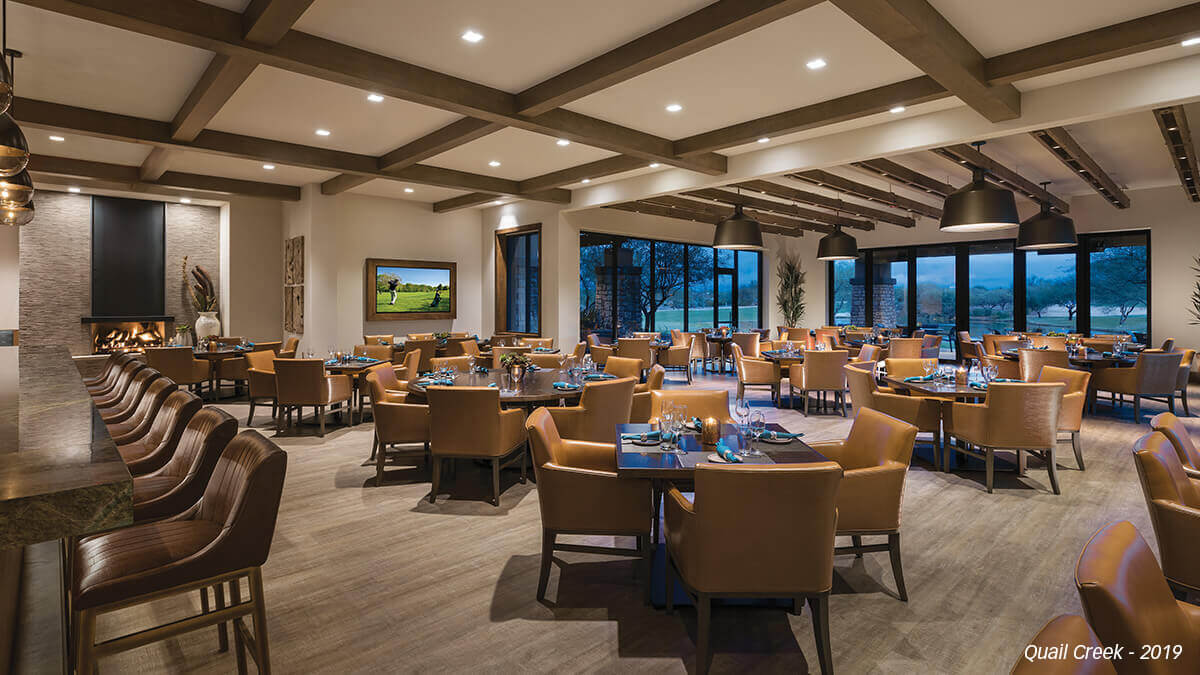 An extensive selection of new amenities was introduced at several Robson Resort Communities to provide homeowners an exceptional resort-style environment.

In 2010, La Hacienda Club opened at SaddleBrooke Ranch offering a wealth of amenities including indoor and outdoor pools, the fully equipped Viva Fitness Center, tennis and Pickleball courts, Esperanza Spa, and so much more.

Quail Creek expanded its fitness facilities with the debut of Anza Athletic Club in 2011. The state-of-the-art facility features cardio and weight machines, multi-purpose fitness studios, and a wellness room. In addition, a Pickleball complex made its debut at Quail Creek in 2013 featuring 16 courts, ramada and restrooms.

Significant amenities were added in 2015 at Robson Ranch Arizona, PebbleCreek and Quail Creek. The stunning Ranch House is the newest social hub at Robson Ranch Arizona and features the Hermosa ballroom/auditorium with stage, multi-purpose room, lounge and coffee bar, a private dining room and more. In addition, the fitness center was completely renovated at Robson Ranch Arizona featuring the latest in exercise equipment. At PebbleCreek, an additional 12 Pickleball courts were completed bringing the total to 20. Plus, this community welcomed a new dog park, fitness studios, two additional tennis courts and the beautiful Oasis Pool complex. At Quail Creek, the impressive Creative Arts & Technology Center, spanning 12,348 sq. ft., opened its doors featuring a variety of rooms catering to the homeowners’ artistic aspirations.

At Robson Ranch Texas, the Wildhorse Grill has exciting new additions including a new dining room, centralized bar with wrap-around seating for 16 along with additional table seating, extended patios, expanded kitchen and covered BBQ area. The expansion also includes an event lawn with gazebo – the perfect place for a variety of social activities, parties, weddings and get-togethers that will serve the needs of this growing community. Other new amenities include an expansion of pickleball facilities with the community now boasting 16 outdoor courts.

Over the past few decades, the Robson Resort Communities have received rave reviews, accolades and top honors from industry leaders such as award-winning architects, leading editors and business experts, each of which inspires the company to continually pursue innovation.

It is truly rare to find a home builder which excels in each phase of the home purchase and ownership experience! 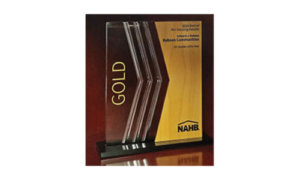 Robson Communities has been named the 2020 National Association of Home Builders (NAHB) “Best 55+ Builder of the Year” during the 2020 NAHB International Builders’ Show in Las Vegas, NV. This award reflects Robson Resort Communities’ continued dedication to developing and building exceptional communities for the 55 plus buyer. 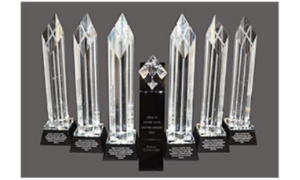 For the third consecutive year, Robson Resort Communities has been recognized with the prestigious Grand Award winner as “Builder of the Year” by the Home Builders Association of Central Arizona at the 2018 Major Achievements in Merchandising Excellence (MAME) awards which honors outstanding efforts of builders, land developers, interior designers, architects, sales managers and sales associates 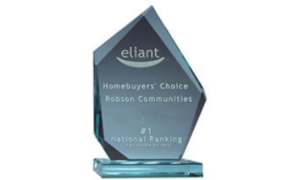 Robson Resort Communities earned multiple honors at the 2021 Annual Eliant Homebuyers’ Choice Awards for its commitment to providing quality purchase and ownership experiences. This national, prestigious awards program is based on the results of more than 170,000 surveys which were administered to recent homebuyers from over 185 new home builders across the United States.

Top 10 Finish Awards for builders closing more than 125 homes in the following categories:

Specific recognition and congratulations go to:

Specific recognition and congratulations go to:

Best 55+ Builder of the Year

The Preserve at SaddleBrooke