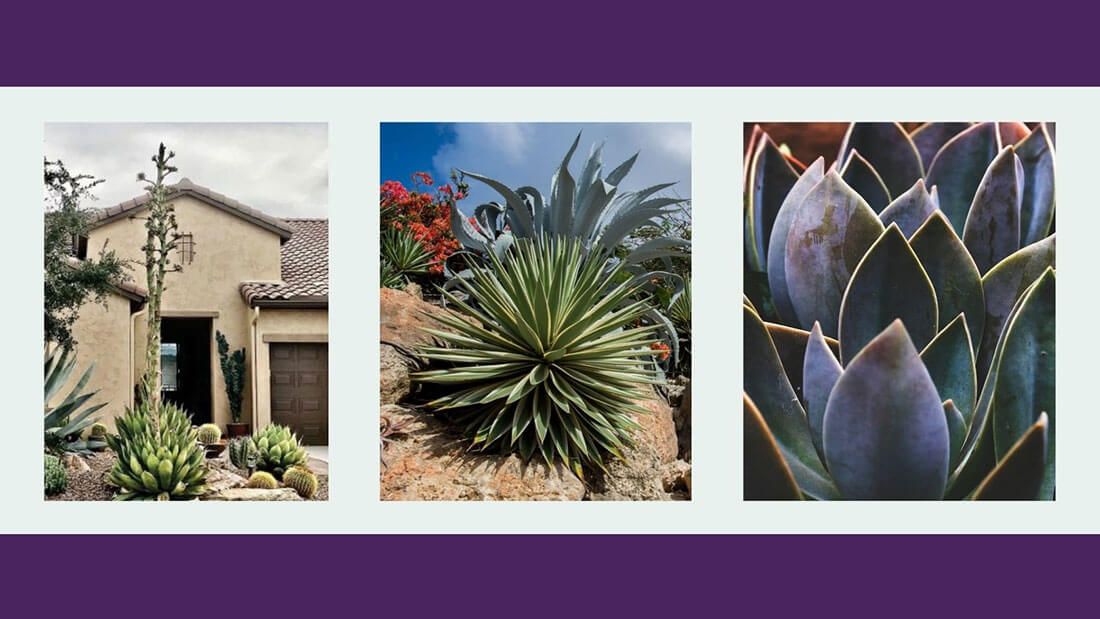 Back to the Garden: Agave: Drama in the Desert

The more agaves I discover, the more I feel they represent the theatrical spirit of the desert. With colors ranging from silver and blue to red and green, in stripes and textures, with teeth and hair, their characteristics seem almost human.

Species of agave are found in the United States, Mexico, Central America, Northern South America, and the Caribbean. The genus of monocots is primarily known for its succulent and xerophytic species that typically form large rosettes of strong, fleshy leaves. Most species are native to hot and arid regions, but some also thrive in tropical climates.

More than 200 species of agave exist, with another fifty subspecies and varieties and more recently, hybrids. With so many species to dazzle you, I’m going to focus on a small number of agaves that might bring drama to your own garden.

Agaves propagate by seeds and “pups” that sprout from the original plant and produce anywhere from a few to a lifetime supply of new specimens. I recently found two small pups growing at the base of my agave americana media picta. They were relatively easy to remove as their roots were short. Now they are drying in anticipation of growing in another part of my landscape.

My first encounter with an Agave ‘Blue Glow’ was a few years ago in the late afternoon November light. The edges of the smooth, blue leaves backlit by the sun seemed to have been bordered in ropes of light. The effect was stunning. A man-made hybrid, Agave ‘Blue Glow’ is both strong and hardy and provides dramatic lighting effects to any landscape.

The agave vilmoriniana, commonly called octopus, flaunts its pale green, twisting leaves up to six feet across. It blooms in spring with golden flowers that produce platelets on its stalk. While all agaves have sculptural elements, the octopus is singular in its abstraction.

Almost all agaves grow for many years without producing a flower and when they do reproduce, all the carbohydrates they have stored over the years burst forth in a stalk that can rise more than twenty feet in height. Agave americana is often referred to as a century plant, though its life span is about 25 years, and other plants that flower only once in their lives are called monocarpic. The spectacular inflorescences can last as long as a month. These plants may be the most dramatic of all agaves; this inflorescence is their final act.

Local nurseries in and around Pima and Pinal County carry many varieties of agave and should be able to help you determine what would work best in your garden. There are also some very good books available that can offer you a much broader view on agaves. Agaves: Living Sculptures for Landscapes and Containers by Greg Starr and Agaves, Yuccas, and Related Plants: A Gardener’s Guide by Gary Irish and Mary F. Irish are in my gardening library.

The SaddleBrooke, SaddleBrooke Ranch Master Gardeners website offers a plethora of additional resources including a catalogue of plants specific to our region, informational links to gardening, water-wise gardening tips, prohibited and invasive plants, and more. For more information, go to our website at www.saddlebrookemastergardeners.org.

The SaddleBrooke, SaddleBrooke Ranch Master Gardeners are volunteers trained under the auspices of the University of Arizona, Cooperative Extension, Pinal County. We offer educational programs and classes to residents of our communities.