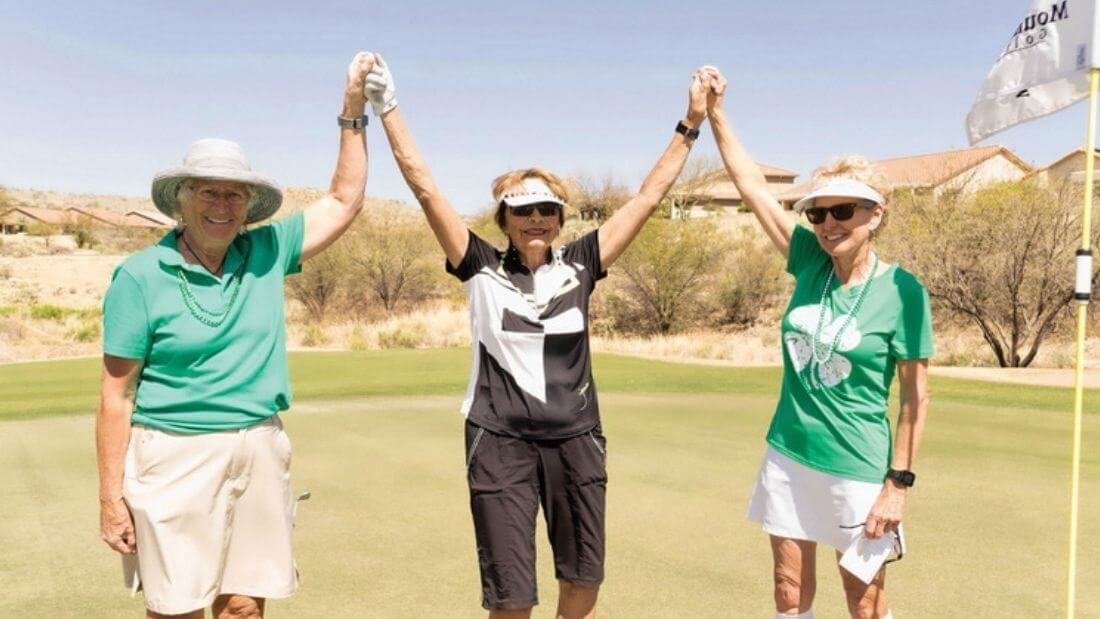 The 22nd MountainView Preserve Women’s Golf Association (MPWGA) Presidents Cup honored current president Judy Grow and our 13 past presidents. Connie Sherman, Linda DeWitt, Jenni Farquhar, Janey Clausen, and Debbie McMullin played in the tournament; Helen McKinny, Deb McGeorge, Gail Fosmire, Donna Barnard, Paula Michels, Linda Thomas Lyon, and Ann Martin joined the celebratory luncheon, and we continued to honor Kate Pope across the miles. We thank these leaders for their dedication to furthering our purpose “to preserve, promote, and enhance the true spirit of the game of golf among women in SaddleBrooke and to support charitable endeavors.”

The two-day, 36-hole net tournament began in March at The Preserve Golf Club. The golf forecast was just as expected, another Preserve-perfect day with 100% chance of fun and sun. Forty-six players in patriotic colors began the shotgun, paying tribute to each past president displayed at the tee boxes. The following day at MountainView, it was another fine top o’ the morning as the sassy lassies, dressed in St. Patrick’s Day green and gimmickry, set off with their 14 lucky clubs.

After the tournament, the parade of green retreated to the MountainView Ballroom for the awards banquet featuring Chinese chicken salad. As the players gathered and ordered their cups o’ cheer, they wondered what special messages had been tucked in the fortune cookies by Event Chair Midge Mollenkopf, a little leprechaun lass if ever there was one. Plentiful pints of thanks to our chefs and banquet staff for their service and good eats. Following lunch, the golf pro and emcee Mike Karpe announced the awards.

Great golf minds think alike. Phyllis Worden and Judy Grow both shot a net 139, so off to par-3 hole 17 for a chummy SaddleBrooke donnybrook sudden-death playoff. Due to her good, clean, green living, Phyllis’ ball chugged right to the mug for a par. Judy’s ball skirted the schooner by just a wee blade of green grass, for a bogey. Congratulations to both players for their great thinking and playing. Phyllis was presented with a set of wine glasses engraved “2022 Champion MPWGA Presidents Cup,” which she used to celebrate her victory.

There were up to four place winners in each of the six flights.

Above all, Phyllis said she was surprised at her win, saying, “It was pretty special.” She played a steady, better-than-normal game; stayed out of the cabbage patch; and captured an eagle on Preserve number 5. Phyllis has been a member of MPWGA for four years. She enjoys her time with the league, noting it is always too short, since she and husband, Jack, are Spokane snowbirds. But we know we will see her, same time, same place next year when she carries on the tradition that the winner plans next.

Golf Cars of Arizona is the title sponsor for this event each year, and we thank them for their loyalty and support. Jigs and jiggers of joy juice to Midge and her shamrockin’ planning team, Janey Clausen, Donna Yon, and Kim Cox. With hopes of luck and the good advice from the fortune cookies: “Bad words never fix bad shots,” “Want a birdy? Get good birdy juice,” and “Practice more, win more,” we look forward to another verse of this ballad next year.

About The Preserve at SaddleBrooke