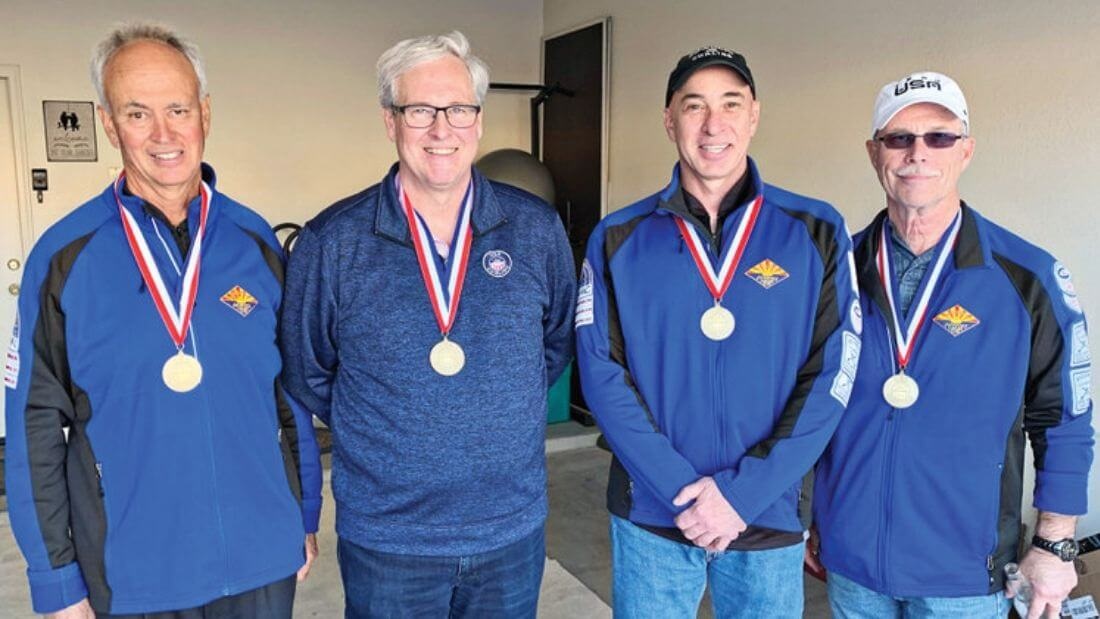 Bob’s team competed against 11 teams from all over the United States. The competition was well experienced, as one of the teams was a former national champion. Another was a two-time champion and another was a three-time champion.

The first round was a round-robin with six teams playing each other. The two teams with the most wins go to the semi-finals. Team LeClair lost two of their first four games, so they had to win their fifth game to force a playoff game. They won that fifth game. In the playoff, it came down to one last throw. Their opponent was in position to take 2 points for the win, but Bob showed his deft touch, and his teammates swept furiously. That last rock slid in between the opponents to take one point for the glorious win.

They won their semi-final game against Team Strauss 7 to 4. They faced the number one seed, Team Pustrova, a two-time National Champion in the finals. Their opponent was full of confidence in this competition as they were so far undefeated. However, Team LeClair showed their stuff by winning 6 points to 3 to take the Gold Medal.

By taking the Senior Men’s Curling National Championship, Team LeClair won the incredible honor of representing the United States of America in the World Championship in Geneva, Switzerland. There, national champions from 22 countries competed for the World title.

For those unfamiliar with curling, four-person teams compete against another four-person team made up of a lead, a 2nd, a 3rd, and finally a skip. They “deliver” (throw) two stones (aka rocks) each and in that exact order across the ice to a “house” (three concentric circles with the button at the center). Two “sweepers” brush the ice in order to modify the distance and direction of the stone. Players alternate with their opponents. Therefore, 16 stones are delivered in what is known as an “end.” FYI, all curling stones weigh 42 pounds and come from the same place, the Ailsa Craig in Scotland (just across the water from Turnberry Golf Club).

Scoring in curling is similar to bocce ball. After all 16 stones are thrown, one team’s stone closest to the button scores a point. If additional stones for that team are also closer to the button than their opponent, additional points are scored. The highest score after all ends are complete wins.

Congratulations to Bob and his team on their phenomenal performance! In Illinois, they were known as Team LeClair, but in Switzerland they compete as Team USA!

Keep an eye out for their Swiss experience in the PebbleCreek Post.

Discover the fun active living community, PebbleCreek, located in Goodyear, Arizona. With an abundance of luxury amenities and countless opportunities for social connection, you’re sure to see the many ways that residents Live life Inspired at this Arizona retirement community. Explore PebbleCreek here.