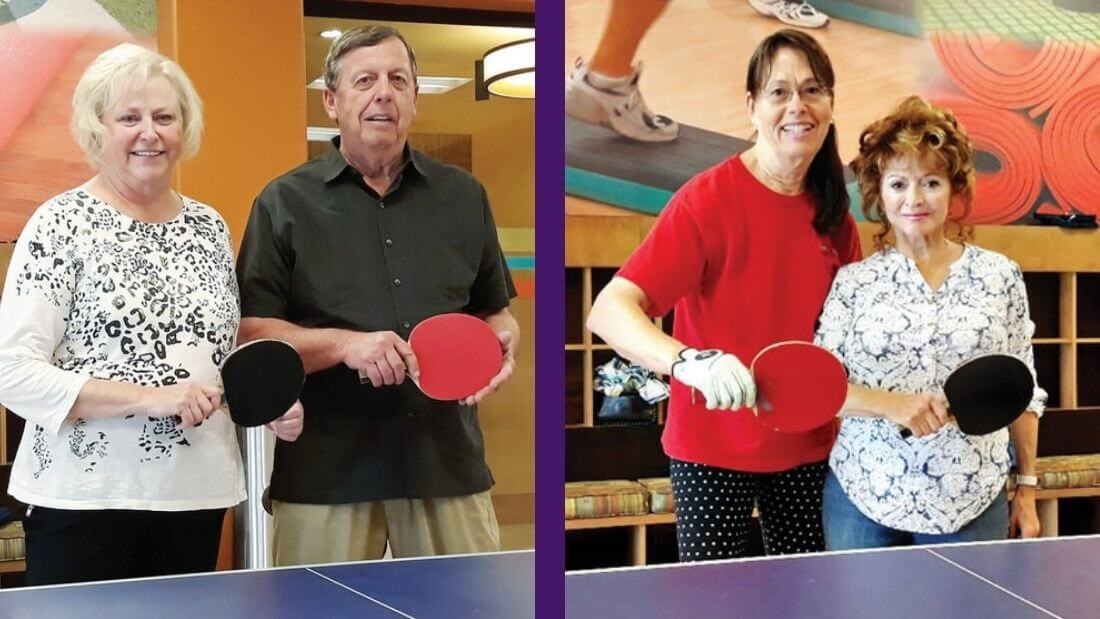 Introducing Barbara Lentz and Steve DeLauro! Barb is a longtime Quail Creek homeowner, but a brand-new table tennis player. She moved here from Washington, D.C., in 2007, working in the world of finance and administration. She retired as the chief operating officer of a publicly-traded insurance brokerage. Prior to that, she worked in the nuclear energy field, which may explain her glowing personality!

Barb played many sports and was inducted into her high school athletic Hall of Fame in 2002. She loves entertaining, traveling, cooking, watching football, swimming, and fishing. Familywise, she says, “I have three step-children, all daughters, and two grandchildren: Milo who is 9 and Amos who will be 4.” Barbara says, “The people who play ping pong are friendly, and I love the competitiveness of the play. We share plenty of laughs, and all are good sports! Two female friends encouraged me to become involved, and I really enjoy playing, although still a beginner!”

Steve and his wife of 51 years, Kim, have been Quail Creek residents for over a decade and hail from Northwest Indiana. Steve was a carpenter in the steel mills for 34 years. He is a fun competitor and enjoys being with the people in the club. Asked how he got interested in ping-pong, he said, “I spent a lot of cold, snowy winter days in Indiana playing table tennis in my basement. There wasn’t much else to do!” Steve also enjoys playing pinochle regularly and an occasional round of golf. While table tennis is great for his eye/hand coordination, he likes observing how each player competes with his or her own style. The couple has 14 nephews and nieces, and they have had many dogs as pets over the years.

Meet Linda Visser and Connie Johnson! The ladies became good friends after meeting at the club several years ago and are two of the many friendly, fun-loving females in our fold. You can often find them walking around Quail Creek together, enjoying each other’s company.

Linda is a retired primary school teacher and raised two daughters with her husband Fred while living in North Central Washington State. At the age of 15, Linda got hooked on the joy of running. She participated in a variety of long-distance runs over her years as a teacher, ultimately working her way up to the completion of a marathon. She had never played ping-pong until moving to Quail Creek in 2015, finding the club members very helpful and patient as she improved her skill level with weekly practice. Besides laughing and having fun with friends while swatting the ping-pong ball around, she enjoys line dancing classes and other activities at Quail Creek. Her next goal? Linda wants to learn all the new line dances taught by her instructor (Patti Bembe).

Connie and her husband Tom moved to Quail Creek part-time from Afton, Minnesota, about 10 years ago. She received a ping-pong table in Minnesota and started to dabble in it. “I have never been particularly athletic,” she says. “But I felt this is something I could do. Little did I know it was something I’d absolutely love. Imagine, a bunch of seniors jumping around and laughing like 12-year-olds and having it be great exercise, too.” She adds, “I love the people like an extended family, and we often socialize outside of the club! I played a couple of times in the Senior Olympics in Green Valley. No trophies, but I had lots of fun.” Prior to retirement, Connie worked as a cosmetologist.

She has a daughter and granddaughter who live in Washington State. Her granddaughter is visiting Quail Creek for the first time, and Connie can’t wait to introduce her to all her friends. Her goals are to stay grateful, stay in shape, and laugh harder!

Discover the more than 100 clubs, classes, and organizations within this Arizona retirement community here.